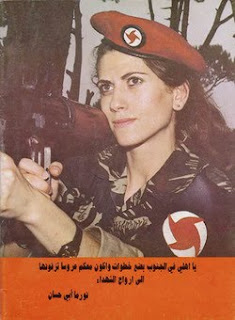 To the left is Norma Hassan. She was a Christian school teacher from Lebanon. She blew herself up as part of an effort to expel Israeli occupation forces from southern Lebanon. She brought 7 people down with her.

Consider some of the facts that many regard as so paradoxical. Most of the 9/11 hijackers came from Saudi Arabia. But they were our allies. Most were Sunni Muslims, not more radical Shia Muslims. Mohammad Atta was well educated and from a wealthy family. What kind of sense does this make? It makes perfect sense if you ready Robert Pape. There were U.S. troops present in Saudi Arabia at the time, and Atta and others regard that as an occupying force.

If you do read Pape you might assume he'd come to leftist conclusions. It was pretty staggering though for me to read his final thoughts. What to do to resolve the problem? Our military presence in the Middle East is the chief motor for Arab antagonism towards us. The Liberation Tigers of Tamil Ealam feel the same way towards the Sri Lankan military. Hamas and Hezbollah feel the same way toward Israel. Should we just leave and wash our hands of the region?

That's not really an option for Pape. Why? Well we need their oil. His solution is to pull out as much as possible, but be ready to pounce if necessary. Basically these natives are sitting on our oil, so we have to do what's necessary to protect our property, but don't overdo it and aggravate them. It's kind of an outright commitment to empire as I read it.