My friend HP is concerned that Wikileaks might make Americans less safe by making us more susceptible to terrorism. My response is if that's true at all it's true in an extremely marginal way. The reason is that there really is no terrorist threat to Americans.

In 2009 25 Americans were killed in non-combat fatalities related to terrorism. Something like 73 would die of lightning strikes. 150 people die every year from falling coconuts. Terrorism is not a serious threat to anyone in America, so if Wikileaks "increases" this nearly non-existent threat by making it twice as likely it's still insignificant.

But maybe that's just because our torture regime, surveillance state, due process free assassination program for US citizens, etc is just that effective. That's why the death toll is so low. That's what HP suggests.

I've documented over and over at this blog how our foreign policy was expected to increase violence against Americans and the data show that it has. Granted the deaths are largely combat related, not non-combat. But still these are dead Americans. For instance a lead Iraqi interrogator Matthew Alexander says that it's no exaggeration to say that half of the casualties US troops have endured are the result of people inspired by detainee abuse to fight against our military.

But just as a data point I thought I'd make an effort to tally American casualties at the hands of terrorist fighters from Islamic states through the years. I'm including sources for the data below. 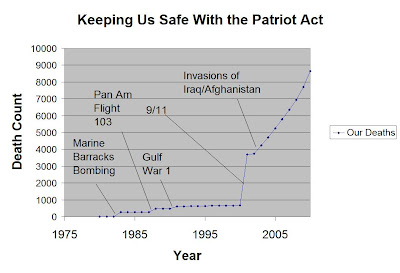 9/11 was enormous from our perspective. A huge spike in American deaths. It's true that we haven't had anything like that since. But we never had anything like that before either. It's an outlier. I don't think it makes sense to give the Patriot Act a lot of credit. After all Americans are dying at a pretty fast clip these days.

Of course people in Islamic states are also dying rapidly. I made another chart that overlays Islamic death at the hands of our government over the top of American deaths at the hands of Islamic terrorists. Tallying these numbers is a little tricky. For one the death tolls are debatable. Like General Tommy Franks says "We don't do body counts." Less effort is put into determining the total number of dead, so we can't be as sure of their accuracy.

Another difficulty is that assigning responsibility can also be debatable. I started with 1980 above because the bombing of the marine barracks is sort of a real starting point for resistance amongst Middle East peoples. The Iran-Iraq War is going on along side this and I regard our government as responsible to a large degree. Our government provided the weapons, probably encouraged Saddam to invade, and probably prolonged the war. For this chart I'm giving the US government half the total death tally.

Following that war the culpability of the US government is more obvious, though the tallies remain questionable. I'm using mostly the lower end estimates for death tolls that I'm aware of. Again, sources follow at the end. 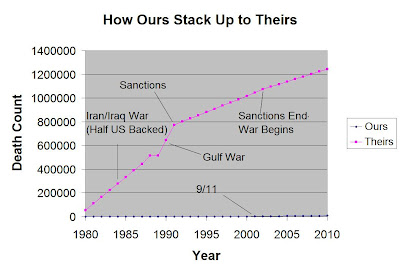 Our government's reaction seems a little extreme in light of the suffering that other victims have endured.

Sources for American casualties at the hands of Islamic terrorists:

Sources for casualties of those in the Middle East/Islamic states at the hands of the US government:

I've included the gassing of the Kurds because the weapons were American and the action was enabled by the US, but that's debatable.
Posted by Jon at 4:15 PM

I've documented over and over at this blog how our foreign policy was expected to increase violence against Americans and the data show that it has. Granted the deaths are largely combat related, not non-combat. But still these are dead Americans.

There is a big difference between innocent civilians at home and military personal fighting a war overseas. In fact, if you asked American soldiers about this trade-off, they would most likely say this is exactly what they are fighting for.

But my favorite response is by David Frum, in his discussion with Glenn Greenwald on Bloggingheads. I'd write it down but its best being heard from Frum himself. See the less than two minute clip here. I highly recommend the full discussion here.

OK, so look at American death at home both before and after 9/11.

In the 90's you have 6. In the 2000's you have 15. Oh my gosh, it's a staggering increase of 150%. What a disaster the Patriot Act has been!! On top of that you've added a massive increase in dead American soldiers. How is this better?

When the # of dead is so low it's impossible to understand these correlations. One outlier changes everything.

And then there's Frum. You're impressed with this statement? Greenwald says that terrorism is not an existential threat. People compare it to the Civil War in which we'd lose 50K people in a weekend. Does that make sense? Frum's response is "Look at how the sophistication has dropped with Bush's disruption in their communications." That's not a response to what Greenwald said. Sure, you spend a trillion dollars, throw out due process, blow up everything that remotely smells fishy and yeah, you'll see disruption. Maybe you drop the decades long death toll from 15 back down to 6. Wow. What does that have to do with Greenwald's question? He's asking about how the scale of the threat is minuscule. Look at the chart I made. Contrast this with death in the Middle East. Even 9/11 is barely visible when it is stacked against the death that is all around them. Does it make sense to throw out our entire system of justice in order to get that death toll from 15 back down to 6?

I'd add that it costs 500 soldiers a year also. But Frum is not responding to Greenwald.