The Power of Photographs 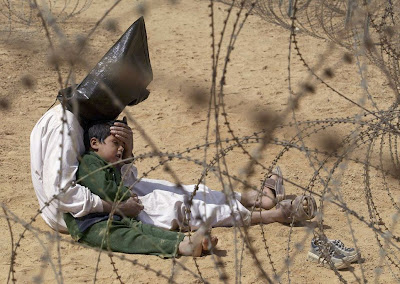 Many have seen the gruesome video of "Neda" in Iran. Apparently shot by Iranian military forces, she's become a symbol for their quest for democracy. Our President understands the power of these types of images. He says that you can recognize the fundamental injustice just from viewing it.

Press corps veteran Helen Thomas, who was almost always ignore by Bush because her questions aren't milk toast, interrupted to ask Obama how he reconciles this statement with his own refusal to release the torture photos. Obama quickly cut her off as the rest of the press corps laughed, and he just ignored her inquiry.

Above I have a famous photo of an Iraqi detainee comforting his own son. It won World Press Photo of the Year in 2003, but I only first saw it recently. I wonder how many Americans have seen it. Maybe not so many. So I thought I'd provide it here. Like the photos at Abu Graib (the background of which is well detailed in a documentary by Errol Morris called Standar Operating Procedure, which is well worth seeing), I think this is the type of thing that is important to see to improve our understanding of what is really happening so far away in Iraq.
Posted by Jon at 11:11 PM 1 comment:

German comedian Volker Pispers explains the history of U.S. foreign policy and terrorism in youtube clips starting here. It's worthwhile to see how foreigners view the United States.
Posted by Jon at 8:50 AM No comments:

Fascinating Discussion on the Dutko Show

I spoke with Bob Dutko today. He's been spending a lot of time this week beating the drums of war, trying to convince his listeners that Muslims are scary, crazy, irrational people that blindly follow the dictates of their faith, which requires them to kill all things non-Muslim.

The Qur'an may not be the greatest book in the world in my view, but I know that Bob misrepresents it anyway, at least in some parts, to make Muslims look as bad as possible. So I challenged him on his presentation of Sura 9, which he offers in a grossly out of context fashion. In his mind it teaches that Muslims should now and forever more kill non-Muslims wherever they fid them. This is absurd, and I had corrected Bob on this before, but it didn't take. So I went into more detail this time. Listen here.

I thought my call went fine, but what was even more interesting was a subsequent call from a Muslim, which I did record. I've never heard a Muslim call in to the Dutko show before. This person likewise challenged Bob's claim that Islam teaches violence against Christians. He said that he was from Pakistan, had Christians friends, knows there are churches throughout Pakistan, so why is Bob claiming that Islam has some sort of problem with Christianity?

Bob engaged in a lot of spin, but the caller didn't bite. Bob pointed out that many people in Pakistan support Osama bin Laden, as if this was evidence of Muslim hostility to Christianity. The caller didn't deny that some in the Middle East support Osama bin Laden, but said that this was because they had a conflict with the United States, not Christianity. If they had a problem with Christianity, why were they traveling all the way to the United States, when there are many other Christians closer to them that they could attack? These people supported Osama bin Laden when he fought the Soviets and they were aligned with the Christian United States at that time. Why would they do this if their problem was with Christianity?

Bob did nothing but spin that point as he justified U.S. support for OBL at that time and subsequent shift. He didn't want to deal with the fact that this shows that the conflict with Muslim nations is not about their problem with Christianity, which Bob has been arguing all week.

It was a tremendous call, because Bob demonizes Muslims week in and week out. This is typical of people that are very aggressive in their militarism. It's easier to bomb people when you think of them as demons rather than humans. Now Bob has encountered a flesh and blood Muslim that doesn't fit the caricature he wants to draw. Bob will assume he's an exception to the caricature, but then why does he struggle so much to justify this caricature when confronted with a Muslim? This may make him pause in the future, and perhaps have a slightly more empathetic mentaility, knowing that Muslims are listening and expect him to back up his claims logically.

Then again, maybe it won't make any difference.
Posted by Jon at 8:26 PM 2 comments:

Bill Moyers has a great interview with investigative reporter Jeremy Scahill. He discusses the contrast between Obama rhetoric and the facts on the ground. Did you know that right now we have 250 thousand private contractors fighting the wars in Iraq and Afghanistan since the latest increases under Obama? That's about the same as the number of troops that are over there. Is that wise? That many people fighting war for profit? A basic rule of economics is that when you incentivize something and you get more of it. So far under Obama we're getting a lot more war. That makes sense from an economic perspective, but is it moral?
Posted by Jon at 11:45 AM No comments:

A Word on Tienanmen Square

Yesterday was the 20 year anniversary of the massacre that occurred in Beijing at Tienanmen Square. This is an extremely important historical event. Everyone needs to see video of the famous and staggeringly brave "tank man". He's a symbol for all free loving people standing against tyranny.

I work with some Chinese people. We discuss these incidents. They point out that it is impossible to view any images related to the Tienanmen Square incident in China. Most of the youth are unaware of what happened, though the adult population is well aware of it.

Many Americans express shock that there could be such repression of historical fact. Hillary Clinton has urged China to face their true history rather than hiding it. This has irritated the Chinese government, but of course Hillary is in the right.

But I can imagine what is going through the minds of Chinese officials. I can imagine a few questions they might ask of the American people. Maybe questions like the following:

When you hear people express shock at the repression in China, ask them if they've heard of any of these incidents? This isn't to say that there is no difference between China and the United States. At least in the United States we are free to talk about anything and criticize our government. But as far as our ignorance of our government's mistakes, are we really so different?
Posted by Jon at 10:14 AM 4 comments:

So How's Obama Working Out For Ya

I never believed Obama represented real change. I thought it was more like the status quo. Which is pretty bad in itself, with Bush's shocking power grabs and disregard for the law.

But it might be even worse than that. Obama is in many ways no different from Bush. And in other ways he's more extreme than Bush.

When Bush was President he liked to kidnap people from around the world, including non-combat zones, such as Britain, and he'd just incarcerate people indefinitely without letting them have a chance to prove they were innocent. A judge ruled against Bush, so instead he decided to ship people to Afghanistan thinking that the ruling doesn't apply there. Obama praised the judge while on the campaign trail as he sought the nomination. Since then another judge has ruled against the Bush Afghanistan work around. Obama is fighting tooth and nail to retain his secret, private, outside the law prison in Afghanistan. See here for details.

In the same vein, on the one hand Obama says we can't disregard the rule of law. The Constitution is sacrosanct. On the other hand he said in the same speech that he needs the authority to impose "prolonged detention" without permitting these persons to have a chance to have a day in court. Rachel Maddow is stunned that Obama can say these contradictory things in a single speech. It is a little shocking. Doesn't he think that someone might notice?

It's no secret that Obama has increased troop levels in Afghanistan, and he's been consistent on that point. But he did promise to have combat troops out of Iraq within 16 months according to his campaign website, including bringing home 1 or 2 brigades a month immediately. That's pretty much out the window now. His new timetable is the same as Bush's.

He was emphatically opposed to warrantless wiretaps on the campaign trail. In fact he was ready to fillibuster any bill on telecom immunity. He ended up voting for telecom immunity before his election. And now he's still listening to your phone calls without a warrant as he fights in court to retain the power.

The list here could go on and on. So to my right wing friends, are you glad to have given away so many liberties to your evangelical President now? You trust your fellow Christian believer when he incarcerates people in secret prisons without recourse. He'll get it right when he identifies enemy combatants. But eventually we knew we would get a new President. That day has arrived. Who's the enemy combatant now?

To the left wingers, we've got a President wiretapping without warrants, increasing troop levels in the Middle East, expanding the war into Pakistan, defending secret prisons, ignoring due process. Heck, he won't even give gays a break as far as policy is concerned, only in rhetoric. The Onion is on the story. How is this President of Hope and Change working out for you?
Posted by Jon at 6:06 PM 1 comment: