Just got results from my physical after having eaten as a vegan for 3 months.  In that time I've been soaking up nutritional information as best I can.  I found a great resource right here.  It's one man's effort to make people aware of what the science has to say about nutrition.  Not for profit, no supplements or nutrition products for sale.  Having watched a lot of his videos and having read and watched other material I kind of expected the results you see below.  And my prior numbers were me making my best effort.  I get financial incentives from work to hit certain health targets, so I was exercising hard and trying to eat what I thought was healthy in the weeks leading up to that measurement.  In fact in the past I've had results that were quite a bit worse that what you see for my November 2016 numbers. 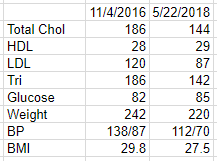 This time I was not really exercising.  I mentioned in my prior post that I had been doing some intermittent fasting, but I stopped soon after making that statement, so over 2 months ago.  I do think that's a good thing to do, I just haven't been doing it.  Despite that I have a very substantial reduction in overall cholesterol.  Similarly for LDL, or "bad" cholesterol.

When I was eating a higher protein diet I became convinced that the problem of high cholesterol was overblown.  I no longer think that.  Though the official recommendation from your doctor will be that you should shoot for an LDL cholesterol level below 100, the evidence tells us in fact we want to be between 50 and 70.  The experts think it would be asking too much of patients to target that level, but as that video shows vegans may reach this level without even trying.  As you can see I'm a bit short of the target, but do expect I will continue to improve with time.

Apparently cholesterol lowering drugs only provide about a 3% improvement in mortality.  A whole food plant based diet on the other hand looks to be about 20 times better.  Better than drugs, no side effects, reduces animal suffering, reduces ones contribution to environmental destruction.  It's looking to be about the biggest win-win-win I've come across.  I am convinced that if it weren't for the $186 billion meat industry and $1 trillion pharmaceutical industry many more people would be eating in this way, and our leading killers (heart disease and cancer) would affect drastically fewer people.

This is what happens when you structure an economy for profit maximization rather than meeting people's needs.  In fact on capitalism a population that lacks needs is catastrophic.  In America hundreds of millions of people are taking prescription drugs.  I believe a huge chunk of that if not a majority could be eliminated if the entire population adopted the right whole food plant based diet.  Based on what I've learned from nutritionfacts.org and other sources I believe that the scientific evidence has supported this conclusion for decades.  The only reason it isn't common knowledge is that it is a conclusion that undermines profits for certain powerful corporate sectors.  Industry studies attempt to create confusion as the tobacco industry did long ago.  It is profit over people.  It needs to end.
Posted by Jon at 7:13 PM 7 comments: