Socialists need a better answer when critics raise this issue.  "But that wasn't REAL socialism" or "I only mean Denmark."  There is some validity to these replies but for a lot of people I think this isn't good enough.  We need to address it head on.  That's what I intend to do here.

Any system will produce avoidable death.  The question is whether the socialist system produced more death than the capitalist system over a comparably sized population and time period.  I would submit that it hasn't come close.

And it wasn't accidental death that the British worked to avoid and mitigate, as in China during the Great Famine.  The Great Famine is regarded as a failure of planning and management, not a deliberate effort to starve Chinese peasants.  The British actively starved people.  This article talks about how the British conducted experiments to see how few calories the people could survive on, then implemented that knowledge throughout the country.  They report of human skeletons walking around doing the work required by the British.  Churchill knowingly diverted food away from Indians he knew were starving, and said it was their fault for breeding like rabbits.

China and India achieved independence at about the same time, with India pursuing a more soft capitalist approach with a fair amount of government intervention in the economy and China pursuing a more aggressively socialist agenda.  China did suffer the Great Famine, but also had some success in terms of rural education, health, and food programs.  The result was 39 million excess deaths per decade in India as compared to China.  This again exceeds all deaths attributed to socialism from all countries.

We're talking about one country and the death toll dwarfs that of all of socialism.  We haven't touched on Vietnam, Iraq, Guatemala, Indonesia, East Timor, Kenya, the Congo, Korea, Iran.  If this is our metric capitalism is an incredible failure. 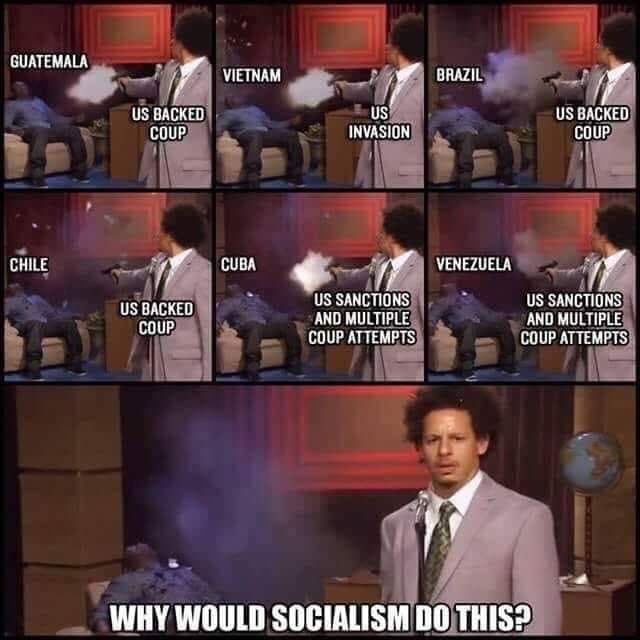 Meanwhile in Bolivia the president and candidate who won the most votes is pressured to leave the country.  His VP is arrested.  A right wing politician who's party won very few votes has assumed the presidency and has signed a measure permitting the military to put down protesters by lethal force.  Which they are now doing.  And in Venezuela Juan Guaido, who recently attempted an overthrow of the elected Maduro government with the support of the US, the country imposing collective suffering on Venezuelans, is still campaigning for insurrection across Venezuela.  Guess which country is described as a dictatorship?
Posted by Jon at 10:07 AM 6 comments:

I'm really impressed with Greta Thunberg's activism.  Her speech at the UN Climate Summit was amazing.  Conservatives are largely attacking her so I thought I'd listen to Bob Dutko the following day to see what he had to say.

To Bob's credit he was not hostile to her.  In fact he says it is obvious she believes what she is saying.  But he would like to let her know that she shouldn't be worried.  In fact climate scientists supposedly haven't gotten ANY of their predictions right.  They have gotten ZERO correct according to Bob.  Really.

These are the claims the climate scientists have gotten wrong according to Bob.

1-20 years ago they were telling us that **by this time** sea levels are going to rise so much from melting icebergs that millions will die, entire countries will be underwater, coastlines will be gone, famine will be running rampant, so many disastrous hurricanes and tornadoes will lead to calamity.  We're going to be burning up and children won't know what snow is any more.  The polar bears will be drowning.

2-30 years ago it was global cooling.  An ice age age **by this time**.  Millions of people are going to be dying from freezing to death and lack of food.

3-Also AOC says the earth will be uninhabitable 12 years from now.

Following this litany Bob made the following statement:

"How many times do these environmentalists have to make predictions and not get any of them right, zero of their predictions right, before we start realizing I'm not going to listen to them when they keep on making these kinds of predictions."

Bob said that in time Greta would see that the coastlines are still coastlines, the temperature of the earth is still the same, the ice is still there in the arctic, no coastline houses are underwater, the state of Florida isn't underwater.

Also apparently a letter was delivered to the leaders of the UN summit that was supposedly a listing of 500 scientists that completely dissent from the mainstream view and they want to have a debate about it.  Why won't they engage in this debate?  They'll say it's because they don't want to give the other side credibility, but if the science was clear this debate should be welcomed.  But they won't because their argument is so weak.  This is Bob's conclusion.

Well I thought I should give Bob a call on this.  But it was tough for me to figure out what to say, and I would suggest to Bob that this is another reason why this debate is not welcomed by climate scientists (though I agree they do not want to give the denial side credibility.)  What Bob engaged in with this discussion is what is sometimes called the Gish Gallop.  Overwhelm your opponent with as many arguments as possible, each of which require detailed research.  Hurricanes, tornadoes, polar bears, ice age, sea levels, global cooling.  I don't even know where Bob is getting his specific information.  How can I discuss without first getting the sources and researching them?  What would a climate scientist do on the stage for 90 minutes?  Would anybody expect this to resolve the question?  It takes tons of time, tons of study.  In reality it takes a research paper, which is what scientists have been going back and forth doing for the past 30 years.  That's why the debate is over.

This is what I was thinking about in placing my call.  I thought maybe I should just call in, ask for a source on one issue and tell him I'll call back next week.  But I decided instead to try to talk about the ice age because he had brought that up the last time we talked and he had provided the source.  At least I can speak to that intelligently.  But I want to try to avoid having him jump from here to there on a different topic.

Unfortunately I was unable to do that.  He seemed to view my effort to bring up his source on the ice age as me just trying to nail him to the wall for one error he made 7 years ago, like this is just me trying to get in a zinger I guess.  And he was off to the races talking about polar bears, hurricanes, supposedly I need to go find a photo of a house from 50 years ago on the coast and compare it to today.  We're off in 14 different directions.  This is what a verbal debate would look like and I can see why no climate scientist would be interested.

Despite that I think the call was OK.  I at least got some good info out there.  But I was unprepared to really deal with polar bears and hypothetical coastline photos.  To Bob's credit though he did let me get most of my points out.

And perhaps I will follow this with reaction to his various arguments.  If I can track down his sources.