I'm really just posting this image because I saw it a long time ago and later couldn't find it when I wanted to show someone. 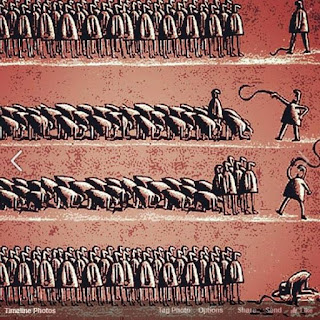 But what the hell, let me just say a couple of words about the arguments you hear against unions all the time.

All powerful organizations have corruption problems.  Corporations, government.  Why are unions so often singled out in this way?  The image above I think explains it.  But on the plus side unions are democratic.  So there is at least a check on corruption.  Corporations are tyrannies and governments often get captured and controlled by tyrannical corporations.  So corruption in these cases can be more difficult to deal with.

"I know a lazy guy that should have been fired but the union protected him."

When you aren't a slave and you have some power sometimes you do things that aren't great because you can.  This is not perfect, but the alternative is worse.

It's like a parent and child.  In most healthy families sometimes children act up.  Sometimes they don't do what they should.  They get away with it because their parents love them and aren't going to crush them.

Unhealthy families can be different.  For some families the children fear their parents and almost never disobey.  When they go to church and all are at strict attention, never acting out, one might look at that and think it is admirable.  But maybe it isn't.  Maybe it's better when there is a little more balance, a little more equality in the power relation.  The price of that equality is the children don't always do as they are told.  They don't always do the right thing.  But it's better this way.  It's worth the price.

Salary negotiations should be left to the free market.  That's why I oppose the fight for $15.  You should only make $15 if you can command that salary based on market demands for your skill set.

Organizing and fighting for $15 is a free market activity.  When Walmart wants to get a good price on paper towels they consolidate their purchasing power.  Workers are doing the same.  They are consolidating their labor in order to negotiate the best labor rate they can get.  If it's good enough for Walmart it should be good enough for workers.
Posted by Jon at 10:00 AM No comments:

A lot of people get pretty fired up about tort reform.  Our health care premiums and products cost so much more because of "frivolous lawsuits."  You know, people that pick up their lawn mowers to trim their bushes and get injured just run to the nearest ambulance chasing lawyer and get awarded millions of dollars.  This is why everything is so terrible.

We should ask ourselves who might benefit from these arguments by anecdote.  Who do you think wants to prevent an ordinary poorer person from having the tools necessary to push back against a powerful corporation that is guilty of negligence that has caused harm?  Who do you think doesn't like power shifted from the board room to a jury?  Who doesn't want to have to disclose what they knew about the dangers of their products?  Who doesn't want to have to spend a lot of engineering dollars improving products to make them safer?  Who do you think has a vested interest in getting you fired up about the need for tort reform?

Did you know that while insurance companies and their lobbyists claim that things like medical malpractice lawsuits give them no choice but to raise premiums dramatically these same companies refuse to allow the public to know how much they pay out in relation to the premiums they collect?  Did you know that in the cases where they have passed legislation that has limited your ability to sue or limited the amount you can collect in damages there is not a commensurate reduction in premiums or even slow down in the rate of premium increase?

Ralph Nader writes a pretty long but informative article you can read here if you are interested in these matters.
Posted by Jon at 8:26 AM 1 comment: