The Machinery of Freedom: Exploitation 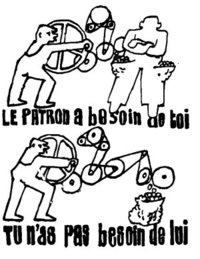 The concept of capitalistic exploitation is straightforward. Investors get the bulk of the money and don't have to actually do anything, except hold stock. Workers produce the product, manage the company, distribute salaries, etc. Then the money left over, that is the profits, which today are at record levels for US companies, is sent to the investor that hasn't actually done anything.

Most people that earn money in this way also earn money through labor. But what we're talking about when we talk about exploitation is the money earned by capitalists as capitalists. The shareholders of Apple Computer aren't the Chinese children forced awake at the drop of a hat, possibly at midnight, to work shifts as long as 24 hours to make i-pads and i-phones. Those children don't share the profit. They just do the work. Their incredibly hard work is a major reason Apple's profits are so large.

That doesn't seem right prima facie. Friedman of course says it is. Why? Because of the time value of money. Acquisition of capital requires savings and investment. The investor is deferring consumption. That sacrifice is the value offered, and so that sacrifice is worthy of compensation.

It is not a matter of indifference to me whether I can buy a house for my family today or ten years from now. Nor is the ten years insignificant to the man who lends me the money now and expects to receive something in exchange. The Marxist is wrong to regard interest received by a capitalist or paid by a debtor to a creditor as stolen money. It is actually payment for value received.

Let's first note the formulation offered here. Savings and investment are necessary for acquisition of tools under the institution of private property. Under laissez-faire capitalism you need the investor. That's kind of like infecting a person with an illness and selling him the antidote and telling him he should be grateful to you because after all, he'd be dead without the antidote. Fine. But what about the illness? Friedman is presumably rebutting the socialist, like Marx. And yet Friedman takes it as a given that savings and investment are necessary for acquisition of the capital needed for production. That is not an assumption Marx will grant.

But what about this claim that deferred consumption is a sacrifice. This statement is true for a poor person. Deferring consumption is a real sacrifice for someone that is hungry or lacks shelter. But is it true for the 1%? That is, for the people that actually own the bulk of the stock? Take Mitt Romney. He's worth what? Hundreds of millions? That last million dollars could either be invested or he could build a house with it. Is he indifferent towards building a house? No, he's not indifferent. He actually prefers not to consume his savings right now. Deferring consumption is not a sacrifice. It's actually his preference.

I'm exactly the same. I have a 401k where I work. There's going to come a day when I won't be able to work any more due to age. So I want to have money for that time. If I could hold my savings in my hands would that do me any good? No. I don't want to spend that money. I prefer to consume in the future, not now. So Friedman is just factually wrong that my investment in stock right now is a sacrifice for me.

A better argument I think would be a comparative one. Friedman should try and argue that this arrangement produces better outcomes than any alternative. I don't think those arguments hold up, but I just think they have more potential than this. This is a moral argument that simply rests on a false assumption.
Posted by Jon at 10:18 AM

You are missing Friedman's point on several grounds.

First, consumption later is not a sacrifice for you because you are getting paid for it! Your 401k, Romney's investment, etc, GROWS the longer it is left there and so then yes, that growth compensates for your "sacrifice".

Take that growth away and then ask yourself,  would you rather have a dollar today or THE SAME dollar tomorrow? Then yes, the dollar foregone for longer periods of time is a sacrifice.

Second, when you speak of property rights in such moral terms, you sound like those you despise. Those who take morals and philosophies above what actually works. I would argue that property rights have been the CENTRAL claim of capitalism and wealth more generally. Without em, we'd all still be living in conditions like before the industrial revolution.

So if property rights work so well, and they are the central tenant of most of all standard of living rises, who cares about the morality of it. Even if the morality were on your side, I would say who cares - they work. Lets move on. You would design a society with em and so would I...so every argument from herein has to be based on the assumption that there are property rights.

With that said, Friedman has written a far longer and more philosophical defense of property rights. You can find it here.

Third, nobody argues that sweatshops are the best place to work. The argument is that they are marginal gains. They make things better than what they used to be and in the process, provide an upward standard of living for all. Remember, these Chinese workers were not sitting at home on Fridays watching TGIF on their 50" flat screens before sweatshops. Most likely they were in absolute poverty (something very hard for us westerners to fathom, since we have only seen relative poverty). This is why all economists, even Paul Krugman, supports sweatshops.

The evidence is overwhelming. Just sticking to China as an example, it is no coincidence that it is both the home of the most foreign investment and the fastest growing country in the world. Wages are rising. Standard of living is increasing. Absolute poverty is rapidly decreasing. All good news.

Fourth, in the post above you wrote: Friedman should try and argue that this arrangement produces better outcomes than any alternative. I don't think those arguments hold up, but I just think they have more potential than this.(emphasis added)

I'm confused Jon. Earlier, in a discussion of Paul Krugman's views vs yours, you told me that you support sweatshops. What am I missing?

Take that growth away and then ask yourself, would you rather have a dollar today or THE SAME dollar tomorrow?

Second, when you speak of property rights in such moral terms, you sound like those you despise. Those who take morals and philosophies above what actually works. I would argue that property rights have been the CENTRAL claim of capitalism and wealth more generally. Without em, we'd all still be living in conditions like before the industrial revolution.

Go back and read the last paragraph of my post. Seriously. I'll wait here.

OK, now that you've read it I hope you can see that the argument you are offering is precisely what I suggest Friedman should offer, and I say that pursuing a moral argument is not the path he should go. But since the argument he offered was moral I replied on moral terms. He'd be better served making a comparative argument. Capitalist exploitation has produced better outcomes. I don't buy it, but it's a better argument. Since he didn't make that argument I'm not replying to that argument here.

Third, nobody argues that sweatshops are the best place to work.

Nor did I claim you said that. Nor did I disagree with Krugman that shutting down sweatshops is a bad idea. I have not claimed that capitalist China has not had enormous success. I think you see a reference to sweatshops and you just go into this conservative talking points mode. You've totally forgotten what the post is about, forgotten the argument from Friedman I'm replying to. You just want to argue what is not in dispute. Sweatshop workers are there because working there is better than their present alternatives. I totally agree so there's no point in arguing it.

You say forget the moral argument. Move on to the practical argument. I'm with you. The practical case is what really matters. But that's not Friedman's argument in this section, so I'm not addressing it.

Actually, a better question is would you defer consumption with atleast a 2% (inflation rate) negative interest rate? Also, with a sometimes significantly higher rate, as it was in the 1970's.

I certainly wouldn't. And I think 90% of the population wouldn't either. If you still would, this is a special personality trait of you...but it doesn't disprove Friedman's general point.

Regarding my second point, again, as I wrote, I was referring to property rights specifically.

Regarding sweatshops, glad to hear. I just wanted you to make that clear.

Remember, we're not talking about poorer people. Poorer people have no savings of any kind. We're talking about upper income groups and upper middle groups. This includes Romney with his hundreds of millions. Suppose Romney has $100 million. He owns a home and cars. Doesn't need much at the moment. You say that he can either blow through that $100 million now and in 20 years he'll have nothing. Or he can have $67 million in 20 years, which is an annual 2% reduction (and I mean in real terms corrected for inflation). He chooses to blow through all the money he doesn't need now you say? I don't think so.

I mean, I could be wrong I guess. But Friedman's argument depends on the assumption that he'd prefer to blow $100 million now. Can you at least agree that it's not obvious that this would be his preference? Romney wants to buy boats, cars, and vacations now and he'll go hungry in 20 years when he's too old to work?