What I've Learned from COVID and Our Election

Some truths that I believe have been exposed over the past few months:

1-We do not have democracy in the US.

We have a system that is more like what exists in Iran.  The Ayatollah selects candidates that are acceptable to him that have slight differences.  The people are then permitted to make a selection among them.

Bernie Sanders was not acceptable to the Ayatollah.  The appearance of democracy is there to convince people they believe they can choose him.  But Shadow Incorporated is tallying the votes in Iowa and you never really get to be sure what happened.  Bernie may have gotten more votes, but Pete won.  The establishment ultimately will converge on a narrative that prevents a Sanders victory (he can't win, Biden can) and that will have a big impact.

If Bernie had been able to overcome this and win more delegates this wasn't going to matter.  The establishment was clear that they would have disregarded the will of the voters.

The big assist is the establishment media.  Imagine if Bernie had spent a whole month falsely claiming he had been arrested with Nelson Mandela?  Imagine if there was a credible accusation of rape against him?  What if Bernie was as confused as Biden?  What if Bernie was on video awkwardly sniffing the hair of little girls and women?  They attack Bernie because anonymous twitter fans are mean.  We're supposed to just trust Chuck Todd and Rachel Maddow when they say Bernie's followers are much worse.  It won't matter that after the fact this will be disproven.  You can try to resist this.  It can be overcome in theory.  In practice though all the money you donate, the canvassing you do, the time you spend on the phone calling supporters, I'm coming to the point where I feel it is wasted.  We must fight with one hand tied behind our back.  I don't see that we can win.

2-Even I'm surprised at how inept the US response is.

We're the richest most powerful country in the world.  We were given plenty of advanced warning about this epidemic.  Frankly China's response was astonishingly swift (see this discussion of their overall timeline.)  The virus was spreading there for 2 months before they even knew it was human to human transmissible (January 15).

And yet China with a GDP/capita about 1/3 of ours was able to get in front of the epidemic and in about 2 months was able to bring their economy back online.  With their extremely dense population centers and massive public transportation.  In the middle of the biggest travel period of the year, in a time of year that is cold with higher transmittance rates for airborne illnesses. 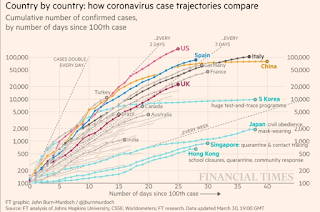 Frankly I'm embarrassed.  But smart people saw it coming.  They knew we're going to have people that just won't go to the doctor for fear of the bills.  Like this.  We have a garbage system, and if this doesn't get people to ask some questions and demand some change I'm not sure what will.

3-Establishment Democrats do not care about anything but their own power.

What's great about Trump is like Homer Simpson he says out loud what he a smart person would keep to himself.  We know he's narcissistic and he's not good at hiding it.  For instance I watched this interview with Hannity.  He's concerned about letting the Covid patients that had been out of country into our country because it will make our numbers look bad.  A smarter politician would think that but keep it to himself.  You're supposed to appear to be more concerned about people's safety then any potential negative perception that comes from a meaningless scorecard, the number of people in America with corona virus.  But it's kind of nice that he tells us what he's thinking.  The truth is laid bare.

But it's sad to say Democrats think similarly.  This amazing report details how Democrats pushed for elections in the middle of this pandemic knowing that it would kill.  They did it because Biden is currently up in the polls and they want to close out the primary to ensure Sanders is blocked.  They go so far as threatening states with a reduced allotment of delegates if they delay their primary out of concern for the health of their citizens.

What about women's rights?  Democrats were very concerned about the rape allegation against Brett Kavanaugh.  What about Joe Biden?  Nah.  It's not even worth talking about.  In fact Biden surrogates are going back in time and deleting their past Kavanaugh tweets.  They have never cared about women's rights, they have never cared about gay rights, they don't care about environmental matters.  They adopt positions that are useful for obtaining votes and will abandon them as needed in service to power.

They are not different from Trump, they are just better at hiding it.  Malcolm X nailed this many years ago, I think he captures it perfectly. 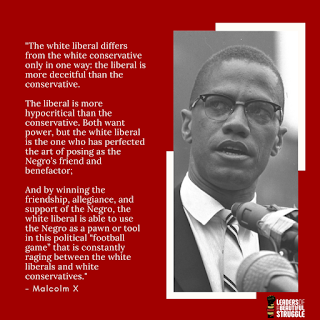 In the city of Las Vegas, currently filled with empty hotel rooms, the homeless sleep in the parking lot.  An empty hospital sits unused because the owner and city can't come to terms.  The maker of an $11K ventilator threatens to sue because volunteers spent $1 on 3D printing materials to create a valve that saved lives.  Reports are that Trump is trying to gain exclusive access to a corona virus vaccine being developed in Germany.  They assure us it would be "affordable."

This type of capitalism is being forced on others.  Iran's health service has been devastated by sanctions and they are struggling with the corona virus.  But the US has tightened sanctions in the midst of this.  Sanctions in Venezuela are very deadly and dangerous during this pandemic.  Recent action by the US is to put out a mafia style indictment, offering to pay people up to $15M to provide information that can help lead to his arrest.  Bombing runs are ordered on Iraq.

In contrast China is sending plane loads of medical help to nations around the world.  In the US media China sending help is proof that they are evil.  Cuba is sending doctors and even taking in foreign sick people.  No apparent concern for how this will make them look statistically.

I understand how the owner of a building needs to make money, that hotels have constraints.  I'm not viewing this as proving that Americans are evil people.  We have a system that leads to action though that produces an evil outcome.  China has a system that is producing a positive outcome, whatever motives people want to attribute to them.  We have to be willing to think about that.
Posted by Jon at 9:00 AM

Oh look, everything here merely reaffirms your already prior held views. Is that a coincidence or confirmation bias at work again?

We should all strive to challenge our views, not cement them. Have you heard of the book Super Forecasters? If anything, that is what I strive for.

My views on democracy have changed. I'm almost to the point where I say electoral politics is a complete waste. At least at the primary level. Maybe the choice between Biden and Trump is a genuine choice, I don't think we get a choice at the primary level. I worked pretty hard, I now feel like my time was wasted. So that's new.

I'd say #2 is also a subtle change for me. We have amazing manufacturing capability, we have a lot of potential, I thought we could realize more of that potential, I didn't expect us to be off the scale bad. Like you said it may not remain there, maybe India or Brazil will ultimately perform worse.

#3, the fact that they went forward with elections did surprise me. The fact that Biden people are scrubbing their Kavanaugh tweets, that also is further than I would have expected. I think this really is a level of disingenuousness that is surprising.

#4, yeah, that one is no different than what I thought before.

How about you? Have you been surprised by anything and reconsidered your prior views?

By the way, I initially titled this something like "Truths demonstrated by our election and Covid" but I changed it because that would convey that this was already known by me. I felt since some of it I believe I knew, other parts I do feel I've had my mind changed. So I titled it as I did, but I get that it comes off as if I've "learned" what I already knew. Probably not a great title.

Jon, I'm surprised you haven't written anything about the election which just happened yet. I would like to see your take on Biden/Harris and thin-skinned crybaby petty narcissist dictator-wanna-be Trump's eruption at not winning.

Hey,
Thanks for sharing this blog its very helpful to implement in our work