Alan Greenspan says that what the government should have done in response to the housing bubble is buy up a bunch of houses and burn them to the ground. Watch him here. 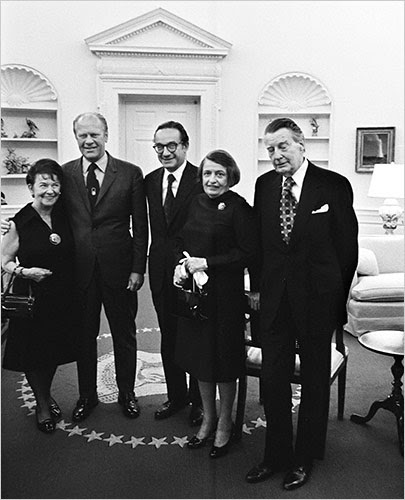 Greenspan was among Ayn Rand's inner circle. Here's a photo of the two of them along with Gerald Ford. But what he's advocating sounds more like Keynsian stimulus. It sounds like something you might here from a liberal. In this YouTube clip Paul Krugman makes the claim that from an economic perspective the attacks on the World Trade Centers were actually good for the economy. The video describes what is known as the Broken Window Fallacy. Sure, breaking stuff puts people to work. But now the owner of the window can't spend his money on other things. He might have bought a suit. Now he can't afford it. Buying a suit puts people to work too. And if the window hadn't been broken people would have been put to work AND he'd have a suit. That would have been better.

Fair enough. But what if the owner was so rich that he could afford both to buy a suit and to fix the window. Does breaking the window mean we actually get to enjoy more economic growth? It seems to me that we do.

Conservatives are generally very much prone to ridiculing this view. Recently University of Maryland economist Peter Morici said something similar regarding hurricane Irene. In reply Mark Perry points to Don Boudreaux, economist at George Mason University in what he calls a brilliant economic smackdown. Here's Boudreaux:

I hereby offer my services to you, at a modest wage, to destroy your house and your car. Act now, and I’ll throw in at no extra charge destruction of all of your clothing, furniture, computer hardware and software, and large and small household appliances.

Hardy har har. Seems Morici's point is kind of silly. I guess he wants us to destroy stuff.

Morici says that destruction does produce economic growth. That is it does lead to an increase in GDP. It comes at the cost of wealth. Wealth is destroyed. Economic growth occurs. Isn't that true? Seems it is. Then comes Boudreaux's fallacy. I guess Morici wants to destroy things.

No, he doesn't. But that doesn't change the facts. Destruction can lead to economic growth. Particularly when present resources are underutilized, as they obviously are in our economy today.

Isn't it true that WWII ended the Great Depression? The government created the demand for tanks, bombs, and planes. So everyone went to work creating them. Unemployment fell through the floor. GDP went up. And the stuff that was created was just destroyed. It does produce economic growth.

That doesn't make it wise. Why not rather create demand for things that are useful and won't be destroyed? Build bridges and schools. Fund research that can lead to improvements for all, like renewable energy and medical research. Rather than send people to war, why not send them off to provide medical care for the poor? That can stimulate the economy as much as war and destruction can.

Better still why not contrive an economic arrangement that doesn't demand escalating consumption, as ours does? Our system does in fact incentivize destruction. Hardware engineers and SW developers will tell you that really phones don't have to be designed such that they are obsolete so quickly. I-pod accessories don't have to be designed so that they are incompatible with future models. But they are. Computers really could be designed so they are easily upgradable instead of discarded. But that's not in the interest of short term profit.

But back to the system we have. We're not in favor of destruction. We prefer a better use of resources. But in an economy where wealth is concentrated in the hands of few and resources are underutilized, would breaking the windows in mansions produce economic growth? It seems to me that it would would.
Posted by Jon at 12:29 PM

The difference is of course Don Boudreaux is primarily referring to wealth - not GDP.

Why? Because said products would be marginally more expensive (or have less gadgets) than the cell phones that last only 2 years. And you know what would happen? Nobody would buy them.

It's the consumer that drives what the companies make. The consumer doesn't want long lasting phones. Sure, maybe a small segment does - the old people crowd, for example - but even they are a very small segment of the consumer demand (and even then, there are cell phone designs addressing that segment). Most people want cutting edge. Most people are willing to pay a premium for technological advancements. Apple, if anything, taught us this.

In other words, the enemy is you, the consumer.

Krugman was right about the bubble in 2003. He said inflating the bubble would pull us out of recession and it did. It fueled consumption and demand. He then said it had gone on too long and posed a threat by 2006. He was right.

Megan, after all the bubbling, still didn't see it as likely to cause problems like a recession. Krugman was precisely right and Megan was totally wrong. And what would Megan recommend in 2003? Tax cuts, like Bill Kristol?

Your claims about phones embraces the myth of the rational consumer. Listen to the link Sheldon provided for some discussion on that.

HispanicPundit, sorry old mate but your logic is a wee bit superficial or and over stated.
What you aren't considering is the innovation effect.
Products constantly upgraded piece meal/at the component/software level as described by the author.
It could be argued that competition to make the base unit or the upgrade would drie prices down and would facilitate customising as opposed to one size fits nobody...paying for features one doesn't want or need.
You omit the laws of innovation in the market
1.the larger the Corporation the less they tolerate competitors.
2.The biggest innovations generally come from the smaller companies..they are more nimble less overheads.
3.without competitors the big corps can cash cow longer, increase the amount of profit by controlling innovation (slowing it down).
Case in point...early in commercial computing IBM a giant it maintained obscene profits by warehousing innovations and only releasing their newer better models to counter the opposition.
What sunk their boat was that they couldn't control the PC and their connectivity thus side lining their mini market on functionality.Both hard ware and software.
The other mistakes they made was not to control the chip development, became economically tied to mainframe OS and software which was rigid and a pain to opperate.
This allowed Apple and Norton in and Microsoft MS Dos, Later with Norton they developed @#%*$# Windows The only legal virus.
The points here are
- IBM stopped innovating as such.
- The smaller organizations developed the innovation.
- Now those two are the blockers.
The conflict comes between the mass marketing approach or flexibe customising...Honestly wouldn't you like to pare down windows and it's locked in connections to MS products.(again one size fits nobody properly)

MS gets about 40% of its income from Patents it has bought and we all know about their antitrust fights to stop innovation/alternatives.

Apple are suing Samsung who make the chips for unlicensed use of intellectual properties(?)..and Samsung are countering on the same grounds. Who pays for this non productive suing we do.

What you don't seem to appreciate is that Corporations first priority is their own longevity not jobs or GDP. They play find the money with Taxmen and will send production off shore if it improver the bottom line.
Interesting side note. Apple's Iphones are made in China and the company has a history of staff suicides because of the condition and pay....Their solution ....put in more American profit paid robots 1000's unemployed....Apple newest corporate product?called Idon'tcare.
Finally consider big Pharma's "me to patents" and how it stops cheaper and or inovations in medecine.
Most of the corporate noise about cost recovery is well all horshit no horse.
What I'm saying is in essence Multinational are an impedement to innovation and growth real growth.

Yes - the rational voter is a big difference between your economic views and mine. Between the left in general and the right. I view the consumer as smart enough to know what is in his best interest. You think the consumer is fooled, or dumb, or misguided and needs to follow some other interest that you deem superior.

Glad you acknowledge as such. :-)

That's not what I said of course.