Looking back in history on major issues confronting our nation I'm struck by how frequently the right wing has been just so colossally wrong and liberal types (not necessarily Democrats, but liberals) have been right.  Let's review some of them. 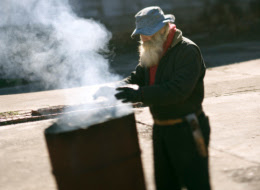 Many liberals emerged during the activism of the 60's.  They wanted expansion of Social Security and Medicare, programs that have been astoundingly successful.  The programs combined have run a surplus, thereby reducing overall US debt.  And probably nothing else has done more to alleviate elderly poverty and suffering.  Liberals at the time also said that the Vietnam War was a totally travesty.  I think that's pretty transparent at this point, defended only by hard core neocons and the ignorant.

Milton Friedman propounded theories related to privatization, reduced social spending by the government, and deregulated finance.  Richard Nixon was wary of testing these theories in the US, but he was willing to try it in Chile.  So it was in 1973.  Unemployment soared from 3.8% to 25%.  Children were passing out in the classroom for lack of nourishment.  Finally by 1982 the banking system collapsed and required state bail out.  All the rosy predictions Friedman offered, defended by right wing elements, were pretty much wrong.

The expirament failed to help the poor, but did help the rich, so it was expanded to neighboring countries.  Argentina, Brazil, Bolivia.  All with similar results.  Catastrophe for most people, pretty good for the super rich.  The right was wrong again.

Reagan entered office and accelerated the war on unions.  He also cut taxes for the rich.  These supposedly were going to help average Americans.  They didn't.  Wages stagnated for those that aren't super wealthy.

Clinton raised taxes and we were offered dire predictions by the right.  The effect on the economy would be catastrophic, so they claimed.  It wasn't.

The right told us that Saddam Hussein needed to be overthrown violently.  For one reason he was involved in the 9-11 attacks.  He also had stockpiles of chemical and biological weapons and was aggressively pursuing nuclear weapons.  The war was foisted on the American people on the basis of various errors, including the transparently false claim that Muslim foreigners resist the US violently because they hate our freedom and religion.  A couple of months into the war conservatives concluded it was already over, and the weapons programs would soon be found (the shift from finding weapons to finding weapons "programs" had begun.)

With the track record in mind let's turn to one of the most serious issues facing humanity today; global warming.  The right sometimes will tell us that it really isn't happening.  But if it is it wasn't caused by man.  But if it is, so what?  Don't do anything about it.

Unfortunately there is a large enough segment of the population that does not learn from mistakes.  They do not notice how wrong the right has been in the past and the enormous suffering that has resulted.  Today we are faced with the prospect of further enormous suffering, suffering that has already begun.  The longer people continue to listen to the people that are always wrong and ignore the people that are always right the more suffering will occur.
Posted by Jon at 11:29 AM

Once the Constitution was broke down line by line by both sides it was just a matter of time until we got to this point.

Here are just a few quotes from a brilliant man.

"I predict future happiness for Americans if they can prevent the government from wasting the labors of the people under the pretense of taking care of them." -- Thomas Jefferson

"The democracy will cease to exist when you take away from those who are willing to work and give to those who would not." -- Thomas Jefferson

"The States can best govern our home concerns and the general government our foreign ones. I wish, therefore...never to see all offices transferred to Washington, where, further withdrawn from the eyes of the people, they may more secretly be bought and sold at market." -- Thomas Jefferson

and my personal favorite.

"To take from one, because it is thought his own industry and that of his fathers has acquired too much, in order to spare to others, who, or whose fathers, have not exercised equal industry and skill, is to violate arbitrarily the first principle of association, the guarantee to everyone the free exercise of his industry and the fruits acquired by it." -- Thomas Jefferson

What's the point here, Chad? Some random quotes liked by conservatives that have nothing to do with the discussion?

Jon,
This is a very periferal comment To the topic but the site is WELL
worth the listen.
http://www.fair.org/index.php?page=4578
Personally it has shot to my No1 site.
It has some interesting things to say about Obama care not all good BUT AND THIS WILL BE THE PART WHERE the Right wing minded's concentration span will go Awol
66% of Doctors in Mass. who work with Romney care are in favour of single payer system.
It raises all sorts of questions as to the hypocrisy of the Republicans and the deviousness of Corp America....

Chad, chad , chad ,
Talk about selective quoting....To hell with context and reality.
Perhaps you need to know a bit more about TJ ....and his associations and where he got his ideas.
BTW you might even call him a proto socialist.