The Farcicle Election and Coverage

Here's Drudge's focus over the last couple of days. Oh my. Biden said something offensive, implying Republicans are for slavery. He said "y'all" as he tried to talk like a southern black man. I'm so offended. What an outrage. 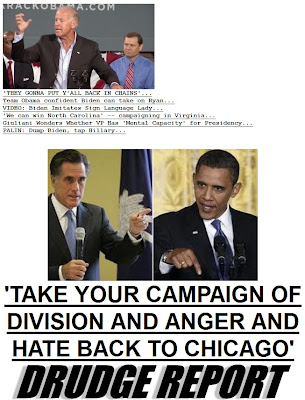 There's actually some real things a person could be outraged about right now regarding Obama. For instance apparently there is a lot of information about our government using all those cameras you see everywhere along with advanced facial recognition software to track people's movements. Wikileaks, which revealed this recently, is under a ferocious denial of service attack, likely originating from the US government. Remember, when Amazon.com and credit card companies were subjected to a denial of service attack from Anonymous this was considered a serious crime. Wikileaks is not engaged in criminal activity. Exposing government secrets is supposed to be a basic journalistic function because this often involves criminal activity and the public has an interest in knowing. What is the likelihood that the Obama administration will consider this denial of service attack a serious crime?

As mentioned yesterday Obama is directly responsible for attacks on worshipers. He's also been known to attack funeral processions and those that rush to the scene of an attack to work through the rubble, perhaps looking for loved ones that may still be alive.

That's all pretty uninteresting though for the "who's up in the horse race" media. Biden said "They gonna put y'all back in chains." That's a big deal.

Biden should be on a shorter leash (a choker) and his handlers should have tasers,with comments like that. Who does he think he is An honorary Tea bagger talk back host.

The comment on the DR is apt (Albeit for dubious motives) and is similar to what the rest of the world is asking.

Biden will cackle gaffes whether he's on a short leash or not. He happens to be one of those kind of guys. I can see him being the life of a party, a guy who'd be fun to hang out with.

I am going off topic here but I have no other means to ask you the following.

Do you ever reach a point where further communication /debate with someone feels pointless to you? Or do you think you there is always an opportunity for constructive discussion?

It rarely becomes pointless to me because I don't do it to convert people here. The point here for me is to learn, and I do learn from the most stubborn right wingers. I had a post a while back where I outlined global warming denialist arguments. I learned the arguments on a right wing blog arguing with people that will never see the light. I don't need them to change. I just need them to throw what they think are their toughest arguments at me. This will prompt me to research and learn.

Some people can become pointless. Some people just can't do anything but reply to me in a straw man fashion. When my critics can't comprehend what I'm arguing they can't give me constructive feedback, and at that point it's pointless.

Some of my critics may have changed their opinions on some things thanks to my arguments, and that's great if it happens. But the important think is that they have helped changed my opinions, and that is really the point here.