I Thought War was Good for an Economy

One element of the debate over President Bush's tax plan concerns how it will affect household and government budgets as well as the U.S. economy. To assess the plan's economic and budgetary effects and to help frame this debate, analysts in The Heritage Foundation Center for Data Analysis (CDA) conducted a dynamic simulation of the proposals in the President's tax relief plan. The final results show that the Bush plan would significantly increase economic growth and family income while substantially reducing federal debt.

Well, that wasn't right. But there's an excuse. 9-11 and subsequent wars. A huge drain on the economy.

But when I talk about the excellent economic performance our country produced in the 40's through the 70's that doesn't count. The wars were an economic boon. Why were the prior wars a boon but the present war a drain?

Not only did we have wars, we somehow managed to pay the debt down at the same time. Take a look at historical debt for the US government. It was amazing until the 80's. 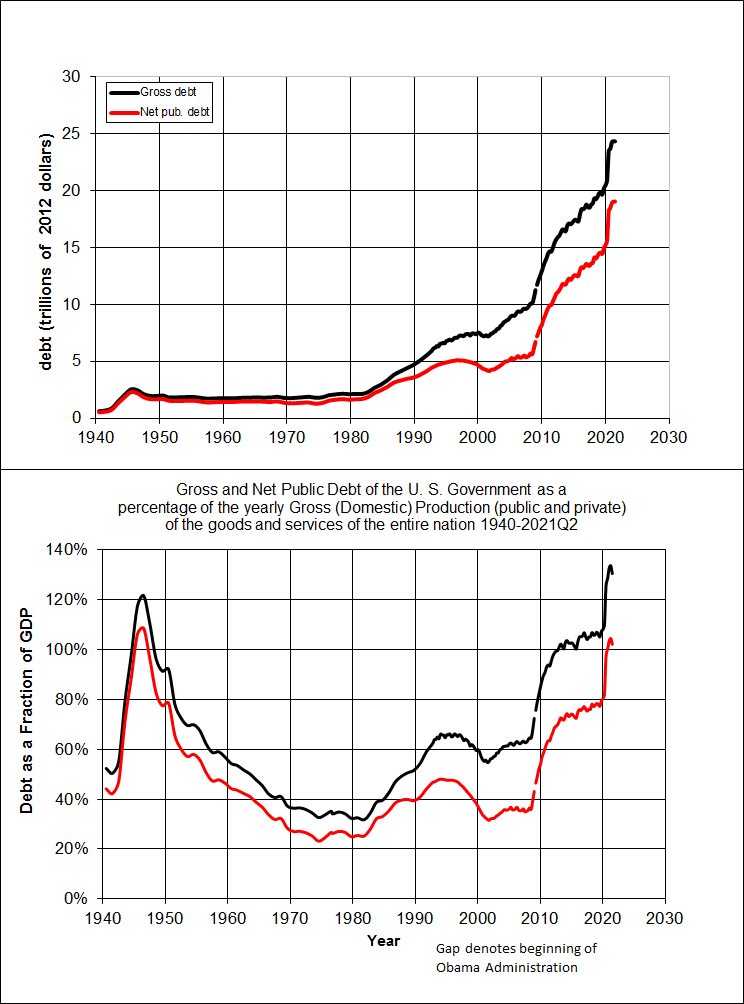 The solution for the debt ceiling? Not a return to Clinton era tax levels. Keep the Bush tax levels. Why? I don't know. But that's what most economists think we should do.
Posted by Jon at 12:27 PM

Also, I am swamped at work. So expect a slow response time.

take your time - but reading the first link it says

W/ regards to the following from the first link -

This strikes me as a bit of bait and switch - a benign one perhaps. But to elaborate - the claim is that within an (almost) 20 year the expansion in total number of jobs created is unmatched historically. Well I certainly hope so. When you factor in that the US has a positive population growth rate and people are living longer (working longer?) this is as one should expect - barring a catastrophe of course.

As to the second link - I had previously told myself I would no longer read post by your friend Tino - as his track record in previous links you've given - the ones I'v have read through anyway - have been lacking. But I read it anyway. The first half of this post isn't very good.

“Bill Clinton’s fiscal restraint in the 1990s helped fuel the great U.S. investment boom of that decade, which in turn helped cause a resurgence in productivity growth.”

But of course now that Obama is in office, running deficits with a lagging economy, the President doesn’t automatically get credit/blame for the economy. Krugman wrote a few days ago:

“By the way, I don’t give Clinton credit for that revival; it was about learning to use technology. But in any case, there is no hint of a Reagan miracle in the data.”


A) it assumes he is not allowed to change his mind. But more importantly,
B) these two things (the two things being quoted) are not actually contradictory. Maybe within some context but he did not provide that.


As to the lagging economy - the current president is *not* responsible for it having begun nor for the projected deficits (before he came into office). Your friend is free (can) to make a case that it has been prolonged because of current policies. Hey may have done so - I am not going to go looking for it.

I don't know if the following is true but my understanding is that the current conundrums of the economy is due to lack of aggregate demand. Whereas in the Reagan era the issue was a lack of aggregate supply. If this is true, and please correct me if you understand it differently, it seems to me (as a non-economist) that - yes - how to approach (try to address) these issues ought to be different.

A bit of a tangent but somewhat related - My first "real" job was for a company started by a group of ex-Lockheed employees. My memory is a bit fuzzy on the details but (some) they would tell me how internally (at least) employees would refer to Lockheed as the "lazy-L". What lockheed, as I understand, was doing was because their defense contracts with the government were cost+ they would hire people (I am sure with some limitation of which I am unaware) to increase body count so that Lockheed could charge the government more. They did not necessarily (at least that was my understanding) have "jobs" for these poeple to do - hence the nickname.

So if it is true that the "issue" (may I call it that?) during the Reagan years was a lack of supply and taxes get reduced to address the supply issue *and* the deficit expenditures explode it is not inconceivable that growth would be very good. At least in short term.

Anyhoo - to cut the story short. I am back to having no desire to read any further posts by your friend.