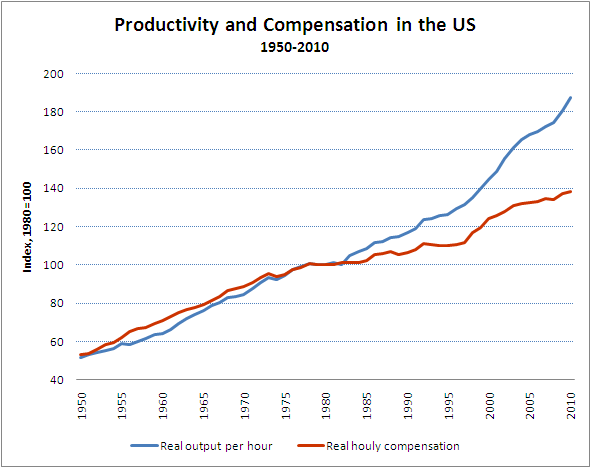 Of course healthcare costs are not included. Yet again.

Why do you say that? Doesn't compensation mean income and benefits?

I think your right - Klein's graph (the original graph he linked to) was wages only, AngryBears does seem to include the full package.

He basically points his finger towards unemployment. Which means - though he didn't spell it out - fed policies are to blame (if you are not familiar with the feds relationship to employment, google the "Philips curve").

This also fits your timeline. Volker started to fundamentally change the fed in the 70's and into the early 80's. Every fed chairman since then, including Greenspan and Bernanke, have basically followed his lead. Something to to think about, for sure.

The more I think about it, the more it makes sense. See here from the economist blog:

This argument has another advantage over the bargaining power explanation—it makes sense across the rich world. Tyler Cowen frequently points out that a "squash-the-middle" explanation for stagnating wages in America runs aground when one realises that other rich world countries—including some with far more union-friendly governments—experienced similar slowdowns over similar time frames. But one can make a strong case that monetary policy has been systematically too tight in America, Europe, and Japan.

Full post can be found here. Matthew Yglesias agrees (a must read).